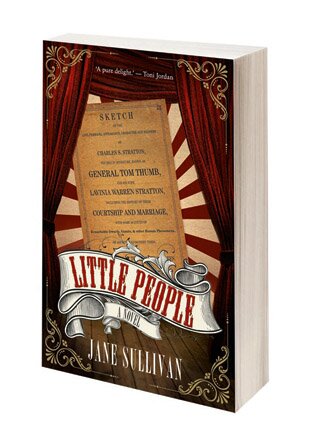 When Mary Ann, an impoverished governess, rescues a child from the Yarra River, she sets in motion a train of events that she could never have foreseen. It is not a child she has saved but General Tom Thumb, star of a celebrated troupe of midgets on their 1870 tour of Australia.

From the enchanting Queen of Beauty Lavinia Stratton to the brilliant pianist Franz Richardson, it seems that Mary Ann has fallen in among friends. She soon discovers, however, that relationships within the troupe and its entourage are far from harmonious. Jealousy is rife, and there are secrets aplenty: even Mary Ann has one of her own. Relief gradually turns to fear as she realises that she may be a pawn in a more dangerous game than she imagined …

This gripping historical novel has all the colour and flair of the circus, complete with sideshows starring the little people themselves. A fantastical tale of intrigue and showtime glamour, Little People will charm and beguile you.

Some books start with an image that becomes an obsession. This happened for me years ago when I was reading a biography of a 19th Century Australian writer, Ada Cambridge. I read that while travelling around Victoria in 1870, she was held up by severe floods. Then in a couple of lines, the book told me that according to one newspaper report, the floods had also delayed General Tom Thumb and his touring troupe.

At that point, a picture clicked on in my head. I’d heard of General Tom Thumb, I knew he was a celebrated American midget. But I didn’t know much about him and I had no idea he’d ever been to Australia, much less toured the country with a troupe. What I saw in my head was a little man standing sorrowfully on a slowly collapsing stage coach in rushing waters. What was he doing here? What happened to him?

It wasn’t until a long time later I began researching General Tom Thumb, looking up books and newspaper and magazine archives. I didn’t even know why I was doing it, but intense curiosity propelled me. I discovered that his real name was Charles Stratton, and that he was extremely famous, like a rock star would be today. He came to Australia as part of a world tour with his little wife, Lavinia, her little sister, Minnie Warren, and a fourth little person, Commodore Nutt.

They spent nine months travelling all over Victoria, New South Wales, South Australia and Tasmania, they put on dozens of shows, and they were feted and mobbed by their adoring public. As well as getting caught in floods on more than one occasion, they braved crossing a desert on foot. Why didn’t we know about this?

I briefly considered writing a non-fiction book about their tour, but there just wasn’t enough information available. But the seeds of a novel were already planted. The story really sprung to life when I discovered that the General and Lavinia never had children, but were often photographed with a baby, as if it were their own child. I began to wonder: what if they wanted a child and couldn’t have one, then decided to adopt one while they were in Australia? What might happen to that child, and to its mother?

Another strand to the story came to me when I read the reviews of the Australian shows. All the reviewers praised Commodore Nutt as a natural, mischievous comedian, but they weren’t so complimentary about the General. They thought he was a portly, pompous old has-been. The General and the Commodore had once been rivals for Lavinia’s hand. I thought how the General might nurse old grudges and become hopping mad reading those reviews, and how the Commodore might respond.

Then there was Minnie, Lavinia’s younger sister. A little wayward, a little flighty. She went to a fancy dress ball in Sydney and danced with Queen Victoria’s younger son, to the great jealousy of all the ladies. What was she up to? What were her dreams?

And so my story began to grow…

This fictional story is inspired by a real event. General Tom Thumb and his troupe of little people visited Australia for nine months in 1870 as part of their world tour, and caused a tremendous stir wherever they went.

While some characters are pure fiction, I have used the names of real people in the troupe and have imagined their characters and doings. The route they followed around Australia is similar to the one in my story, and some of the events I describe did take place, though I have changed some details.

For example: to get to Adelaide the troupe had to cross a desert. In Seymour, Victoria, they were held up by floods. In Oatlands, Tasmania, they had to perform in a stable. They survived a perilous fording of a flooded river. At a fancy dress ball in Sydney, Minnie Warren wore a Red Riding Hood costume, danced with the Duke of Edinburgh to the envy of all the ladies, and was said to have kissed him. “I never kiss and tell,’’ Minnie told Mr Bleeker, the troupe’s manager.

While the General and Commodore Nutt never fought a duel, they were rivals for the hand of Lavinia and at one stage had a scuffle where the Commodore threw the General onto his back. I have imagined that their rivalry was rekindled by the Australian newspaper reviews of their shows.

In some ways, the most important person in my story is a background character: Phineas Taylor Barnum, the quintessential American showman. The real Barnum was the discoverer and mentor of the little people, and the promoter who turned them into the equivalent of pop stars, so it is impossible to overestimate his influence on their lives. Barnum’s life is well documented in two autobiographies, a collection of letters and a number of excellent biographies.

My main sources are an account of the world tour written by the troupe’s manager, Sylvester Bleeker; an autobiography by Lavinia Stratton, “Mrs Tom Thumb’’; contemporary accounts and reviews of the tour in Australian newspapers; and, for background, books by and about P. T. Barnum.

The General and Lavinia never had a child, but it was widely believed that they had one, thanks to Barnum’s spin doctoring. They were frequently photographed with a baby in Lavinia’s lap. In 1863 a medal was struck to commemorate the birth of a child, who was said to have died two years later. The General and Lavinia also carried infants to visit royalty on their tours. The children were supplied by foundling homes and were given away when, as inevitably happened, they grew too big to be credible “thumblings”.

The condition that characterised all four little people was probably what is today called pituitary dwarfism 1, or sexual ateleiotic dwarfism, caused by a deficiency in growth hormone. People with this rare genetic condition stop growing in early childhood and though they may grow a little in later life, they remain at much below average height. Unlike some other forms of dwarfism, the head, body and limbs remain in perfect proportion. They may be born to parents of normal height and may have average-sized siblings.

Some people with pituitary dwarfism are unable to have children; others have children who may or may not have the same condition. They are more likely to have normal-sized children. The genetics were not well understood in 1870, and it would have been reasonable then for a little person to expect to give birth to another little person. But there might also have been a fear of giving birth to a normal-sized baby.

Readers may be interested to know what happened to General Tom Thumb’s troupe after the world tour. The little people continued to tour America, and the General and his wife built a fine miniature house in Lavinia’s home town of Middleborough, Massachussets, where the General indulged his fondness for yachting and horse racing.

In 1881, the couple were travelling with Barnum’s “Greatest Show on Earth” when a disastrous fire ripped through their Milwaukee hotel. Mrs Bleeker died from her injuries in the fire, and the General was said to be so upset by the experience that he died from a stroke the following July. He was 43, and had been performing since he was four years old.

Lavinia’s sister Minnie did eventually marry another little person, Major Edward Newell, in 1877. She became pregnant, and everyone expected a tiny baby. But she gave birth to a child weighing nearly six pounds. She died from exhaustion and the baby died soon afterwards. Mother and child were buried together in the Middleborough family plot.

Although Lavinia was said to be devastated by all these deaths, she continued to tour on Barnum’s advice. She appeared with two little brothers, Count Primo and Baron Ernest Magri, and in 1885 married Count Magri. These three little people went on performing together for many years (it seems Lavinia’s days of wealth were long gone), and even after retirement, they set up a roadside stand for passing tourists in Middleborough, selling candy and soda pop. Countess Magri, as Lavinia became known, died in 1919.

Some reports say that Commodore Nutt never married. But according to the New York Times, he married a Miss Elston of Redwood City, California, some time in the 1870s. She was a woman a little below average height. When Nutt died of Bright’s disease in 1881, his wife sobbed over his coffin, calling him her dear little boy.

Struggles and Triumphs, or, the Recollections of P.T. Barnum, Written by Himself (Ward, Lock & Co., 1882) 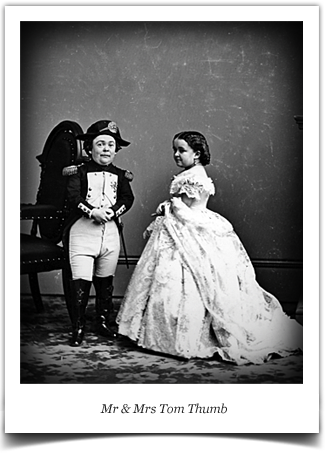 “A pure delight – I fell in love with this glorious novel from the very first page. Little People is vibrant storytelling at its charismatic best.” – Toni Jordan

“A startling feat of the gothic imagination, made wholly convincing by lucid and controlled storytelling.” – Amanda Lohrey

“A bold contemporary venture into a literary form — that of melodrama — that has been put to serious use in Australian literature from Marcus Clarke to Manning Clark, from Christina Stead to Patrick White to Thomas Keneally. Ambitious, odd, self-assured, this novel affords a singular and unusual pleasure.” – The Age

Novel of the Week – The Week

“With even characters of the shortest stature being larger than life, Little People is a great read.” – Northern Star

“Set in a fascinating milieu … a most enjoyable read.” – Bookseller and Publisher

“Little People, a darkly romantic fairy tale with fantastic elements of nineteenth-century Gothic, is set in Australia in 1870. The central character, Mary Ann, stands out, Bronte-like, as a governess, but something more Dickensian-grotesque lies in wait for her … The final section of the novel takes off rather like an episode of Doctor Who, and builds to the wild conclusion, with all the elements coming together to amaze the reader. At the beginning, Mary Ann said she had ‘no idea how dangerous the world could be.’ How right she was.” – Australian Book Review